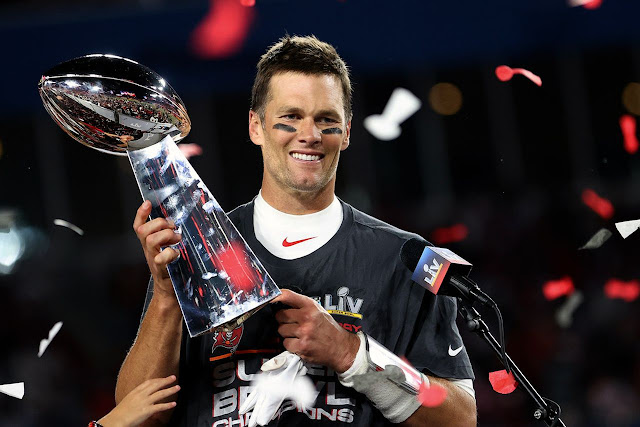 "I think Tom is one of the most consistent players I've ever trained. He works hard every week. There are no ups and downs with him."

Tom Brady is considered by many the best quarterback in the history of professional American football in the United States; however, this writing will not be about football. It will be about self-leadership.

Throughout my personal and professional life I have found that sports are not only an extraordinary opportunity to achieve physical and mental health, but also represent an avenue to test our talents and skills, attitudes and aptitudes as well as our ability to deal with mistakes and successes, challenges and obstacles, sometimes in conditions beyond our control. In Tom Brady's case, we have a lot to learn, even for those of us who don't play football as a sport.

Thomas Edward Patrick Brady Jr. was born on August 3rd, 1977 in San Mateo, California. A descendant of immigrants, he grew up in a close family with three older sisters. During high school he played baseball (with very good results), basketball, and American football (a sport for which he developed a particular passion from a very young age). He eventually was recruited by the University of Michigan, where he competed, since the beginning, for a space to demonstrate his talent and ability.

In the year 2000, a different story starts to be written in the life of Tom Brady. A story with a somewhat grim front page. The New England Patriots team selected him as a quarterback (finally in the 199th pick of the recruiting process, in the sixth round and as the seventh quarterback chosen among all teams). His choosing took so long and lacked so much relevance that no one would have thought that day what would happen in the future. Tom Brady did.

In honor of the purpose of these lines and to maintain their pragmatism, we will subtly glide through the years (from 2000 to 2020) until we get to observe our star player today. During two decades of professional sports career, the numbers of this athlete's performance speak for themselves (from whatever perspective you want to measure). Tom Brady has 230 games won in the regular season, plus 34 games won in the postseason. Voted the most valuable player in the professional league three times (2007,2010, 2017), he has seven (7) Superbowls won in ten (10) appearances where he earned five (5) Best Player Awards. He is the only player to lead the professional football league in completions, attempts and touchdown passes. Extraordinary results from sports giants such as Joe Montana, Johnny Unitas, Peyton Manning, Brett Favre, Dan Marino, John Elway and others fail to match Tom Brady's numbers. At 43 years old, he just became the oldest player to be named the SuperBowl MVP.

However, when studying his professional career with careful attention, there are many characteristics that transcend the sport of American football that this player possesses, from which we can all learn. Although there are many, some particular and unique, we have tried to summarize, consolidate and express them in only five of them.

1.                  HUNGER.  This is, perhaps, the characteristic that has taken it further. A suigéneris mix of grit and resilience, focus on goals and results. It is a muscle that has developed in an impressively consistent manner. Having been drafted #199 in the year  2000, Tom Brady did not have the ideal physical aptitudes of a quarterback to make history. He entered the NFL as an average player. His work ethic, leadership, and desire to win are unmatched. He also has something that only winners possess: he is not afraid of losing what has paradoxically led him to flourish in the most critical and adverse moments (such as the epic victory against the Atlanta Falcons in Superbowl # 51). His hunger has been evidenced, when looking for a new team at 43 years old, an age at which many would be thinking of retiring. Tom Brady loves to compete and loves to win.

2.                  HUMILITY.  The fame and fortune of a professional football player (particularly a quarterback) are natural conditioning factors to feed arrogance and pride. However, Tom Brady's humility is not weakness, but the product of a clarity of thought that frees him from the burden of what has been achieved and feeds him from the motivation of the next  award  that awaits him. He has his feet on the ground; but his gaze on the stars.

3.                  KAIZEN.  I'm pretty sure Tom Brady never studied kaizen (philosophy of continuous improvement in Japanese) at the University of Michigan; but he has become, over the years, an expert teacher on the subject. His training in season and outside of it, his diet, his performance, the study of the different plays, the precision of a winning shot, the mistake of the unsuccessful play, are actions meticulously studied by him to be improved. However, there is no better expression of kaizen in his career than the risky decision not to sign a contract renewal with his lifelong team (New England Patriots) and to start with a new team (Tampa Bucaneers) at 43 years of age. The result of that decision was simply extraordinary, being crowned as champion in 2021.

4.                  FOCUS.  “When I'm playing football, I appreciate it. I am there, I am nowhere else,” Tom Brady asserted in an interview for North American television. His mindfulness in the present moment is one of his competitive advantages. Grace under pressure and competition with himself are uniquely blended in a player with Swiss-watch-like precision and laser focus.

5.                   TEAM PLAYER.  The most successful quarterback-coach duo in the history of the National Football League (NFL) is undoubtedly the one that the New England Patriots had with Tom Brady and Bill Belichick (the latter being considered the best coach in league history). During tireless days, sometimes in the most adverse circumstances, Tom Brady always reaffirmed his status as a team player. Empathy, genuine interest in his teammates and effective communication from him are some of the elements that have always united him to his teams.

These lines had a single objective: to identify certain skills, habits, routines or characteristics that, worked tirelessly over several years, led (and continue to do so) an athlete like Tom Brady to the best expression of himself in the search for his maximum potential as a professional football player. Perhaps these characteristics can lead each of us in our professional, and even personal, activity to follow the same path. Nothing seems more attractive to me,  than trying.