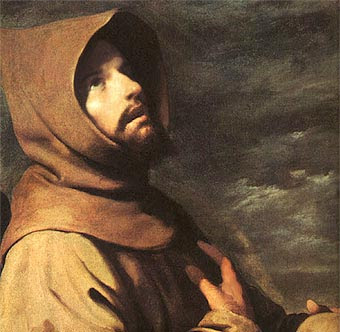 “Start by doing whatever it takes; then do what is possible and suddenly you are doing the impossible. "

Writing these lines is to face a majestic challenge. These lines are not a
biography or a religious writing. They are a contemporary analysis, from the
human standpoint, of a transformative leadership like few others: The
leadership of Saint Francis of Assisi.
San Francesco d ’Assisi was born in 1182 under the name of Giovanni di
Pietro Bernardone to go on to become one of the most prominent figures of
Christian spirituality of all time. The teachings of his life remain with fresh
relevance and vitality more than 700 years after his death. Perhaps, today,
more than ever.
The life of Saint Francis of Assisi is simply an extraordinary story from
beginning to end. It is full of contrasts, internal (and external) struggles,
an impressive work in himself, a renunciation of the superficial and an embrace
of the fundamental. An unconditional love for nature and living beings. A
life. His earthly life worth knowing, his legacy worth imitating.
revolutionary man whose weapon was pure love and his battlefield was his own

Born into a bourgeois family that traded in fabrics, Francisco was a

carefree young man, leader of his friends’ adventures where waste was a daily
act when he was not studying Latin. However, everything changes when the city
of Assisi, in the western part of Italy, goes to war with Perugia and the young
Francisco falls ill in captivity on the battlefield. To be held as prisoner
while being sick  from malaria leads him
to start his first conversations with himself.
Upon returning from battle, in the small temple of San Damiano, Francisco
hears a voice when looking at the image of Jesus Crucified: "Go and
repair my Church, you see it is a ruin." At that moment and with an
unparalleled determination, he runs home, takes rolls of cloth from his
father's warehouse, sells them, and gives the money to the priest for the
restoration of the temple. No one imagined what was about to happen. His
father, extremely upset by what happened, confronted his son and the bishop
publicly. Francisco, in an unprecedented act, returned what was taken from his
but all his clothes as a sign that he completely renounced the earthly and
father and in front of everyone publicly gave him not only what he had taken, would dedicate his life to the spiritual. That day a new story is about to be
approach to embracing poverty and rejecting the superfluous.
written. Francisco shows an fierce and unwavering determination. A relentless

The clarity of his mission was unquestionable, to the point that without

ever having been ordained as a  priest
and barefoot he asked  the Pope Innocent
III for an appointment for an  authorization to create his religious order.
Amid the rejection and disdain of many cardinals close to the pope, he granted
the requested authorization. His work to preach led him to grow in number of
which St. Anthony of Padua  would be
followers creating what is currently known as the Franciscan Order, within
incorporated, and  also St Claire of
Assisi, who would found the order of the Poor Clares. Over time his teachings
were preached in Italy, France and Spain and in the midst of the Crusades (religious
wars in the middle ages) he sought to convert Syria and Morocco where he
even met with Sultan Al Kamil. On his return he worked tirelessly, but decided
to dedicate himself to the contemplative life where in September 1224, after a
long period of fasting and prayer, on a rock next to the Tiber and Arno rivers,
Francisco received the stigmata (the wounds of Christ in his own body),
which he always tried to hide because he felt unworthy of having them.
His suffering at the end of his life, as a result of his illnesses, did not
affect his deep love for God, writing a year before his death the wonderful
poem Canticle of the creatures or Canticle of the sun brother. Francisco
died on October 3rd, 1226 at the age of 44. He was canonized on July 16, 1228.

First: The Leadership of oneself. San Francisco had to find himself first,

before any other action. That was the beginning, but also his daily journey. He
worked  on his  strengths and weaknesses before daring to do
it with someone else. He never sought prominence or fanatic followers. In fact,
he had several crises with the Church of his time and with the members of his
order.

Second: A mission bigger than him. His determination to have the revolution

of pure love and to embrace detachment always got him in trouble.  But his
intrinsic motivation was impressively
high. He never let the circumstances around him change his vision and mission.
Caring for and hugging lepers was more important than catching the disease or
enjoying the contempt of people for doing so.

Third: The precious paradox of Saint Francis of Assisi. Personally, I

think that having extraordinary humility, simplicity, benevolence, mercy and
generosity on the one hand allowed him to compensate a fierce discipline for
the deep improvement of oneself, of the virtues, of morals and of good habits
that lead us to better world.

The legacy of Saint Francis of Assisi is so important

today that Cardinal Jorge Bergoglio (the first Jesuit pope in the southern
hemisphere, takes the name FRANCISCO in his honor, when he was elected pope on
March 13, 2013.) Pope Francis seem to sum it all up: "the purpose
of Jesus in becoming poor is not poverty itself"

It is difficult to write a few lines separating the

spiritual and the human in the person of Saint Francis of Assisi; but on the
other hand it is not difficult at all to realize, after studying his life, the
clarity of his mission, the application of his teachings to the life of any of
us and above all the  current value  despite the passage of time.