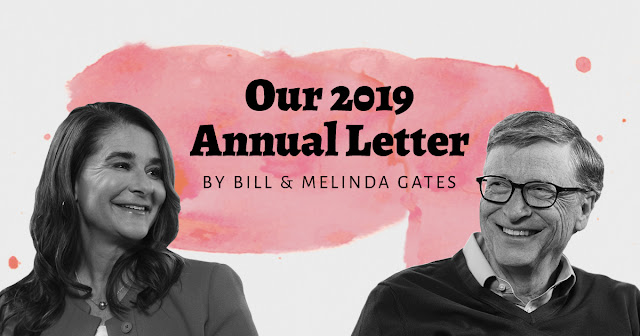 It was 12 hours with 15 minutes, at midday (Honduras time or GMT -6), on February 12th when I received the notification of a new mail in my inbox. To be completely honest, when I realized what kind of mail it was, I immediately stopped what I was doing. It was THE ANNUAL LETTER 2019 of Bill & Melinda Gates, something that was for my something like THE WARREN BUFFET ANNUAL LETTER (which the billionaire investor prepares for the shareholders of his company Berkshire Hathaway).
I read it completely at once and right there I decides something quite unusual. I decided I would write a summary essay about the document so, in that way, anybody in any place could learn about it in a more summarized and practical way. However, it wasn’t until halfway through the attempt that I realized completely the magnitude and degree of difficulty of the job. The project became a bit more difficult at its execution phase, but supremely enriching.
And the thing is that Bill Gates always writes with clarity of thought, basis on numbers and a challenge implied between lines (I still recall enjoying his way of writing as I read his book The Road Ahead, published on the 90’s.)

THE ANNUAL LETTER 2019 is the way in which Bill & Melinda Gates communicate to the world what they do in their foundation, but what is even more important to me is that they share in the  present what they have learned in the past to prepare themselves for the  future. And this 2019 LETTER they summed it up in 9 surprises. My goal, with this essay, is to achieve an experiment of telling about the 9 surprises in a simple, straightforward and easy to understand way. Now, it would not make sense just to capture them without adding as a seasoning a sui generis mixture of information, emotions and reasoning, numbers and letters with the objective of practicing the sport of learning.

SURPRISE #1:  AFRICA IS THE YOUNGEST CONTINENT.

Bill Gates explains things the way he has always done best: with numbers. He points out that, globally, the average age of the human being is increasing, except for Africa. In Africa it is 18 years. In the United States it is 35 years. The annual number of births is growing in the poor parts of sub-Saharan Africa, which is a risk in itself, but Bill Gates thinks that: “if Africa focuses on high-quality health and first-class educational services, both conditions will be the 2 twin engines of economic growth.” On the other hand, I learned from this document that the greatest opportunity lies in the fact that girls' education is one of the most powerful forces of change and progress on the planet. It seems that the equation is like this: Educated girls = healthier physically and economically = leaders of change in their areas of influence.

While genetic testing was used to capture a serial killer in the United States, a particular connection was found between premature birth and six genes (including the one that regulates selenium in the human body).
The Gates Foundation study found that pregnant women who have that gene are more likely to give premature births. Now, the finding is INCREDIBLY RELEVANT for our Latin American countries. 15 million children are born prematurely annually in the world, being the number 1 cause of death in children under 5 years. The conclusion is categorical. We all know, from family or personal experience, that a 36-week-old baby is in a much better condition than a 34-week-old one. In my particular case, what has been learned has raised an alarm to see its preventive application in all the mothers of families served by our voluntary organization SOLIDARIDAD, focused on reducing child malnutrition in Honduras.

SURPRISE #3: WE WILL BUILD A NEW YORK CITY EACH MONTH.

There is no doubt that the topic of climate change must be analyzed based on science and numbers, not on emotions or passions. Bill Gates stresses that to advance in favor of the environment we must understand greenhouse gases (which in the Earth's atmosphere are water vapor, carbon dioxide, methane, nitrogen oxide and ozone) are generated by electricity (25%), agriculture (24%), manufacturing (21%), transportation (14%), and buildings (6%) of human beings. The above leads him to conclude that, if we really want to solve the problem, it is time to realize that many activities of our current life require fossil energy and release carbon. According to his calculations, by 2060, the world will have twice as many buildings as today (a New York City per month) so the only solution seems to be Radical Innovation in all areas with active participation from all.

Bill Gates confesses, in a reflective way, that he dedicates a big part of his life studying data, which has led him to discover something revealing: there is very little data about women in the world. His wife Melinda Gates says that, when traveling through developing countries, she has found herself asking questions like: How much money did women earn last year for their work? They are not very easy to answer in poor rural communities. Everything seems to indicate that information about women is small and imperfect. “What we measure is a reflection of the values of society. We cannot accept an I don’t know as a response from governments,” Melinda Gates points out.
This reminded me of an essay of ours, written earlier this 2019, where we quoted Hal Gregersen, Executive Director of the MIT Leadership Center, who asserts that today “Questions ARE the answers.”

SURPRISE #5: YOU CAN LEARN A LOT ABOUT HOW TO MANAGE YOUR BAD CHARACTER BY WATCHING TEENAGE BOYS

Of all the surprises, this is, for me, the most revealing. Possibly it is because of the very particular way in which Bill & Melinda Gates describe it. They tell how they spent an afternoon with a group of inmates in a prison in the United States. After having heard the experiences, feelings and thoughts of the inmates, they could perceive that many of them were imprisoned for violent acts that could have been avoided. Therefore, the Gates Foundation decided to implement a pilot project with young people exposed to violence. Bill decided to actively participate in one of those groups of young teenagers. After leaving the session, he realized that, for human beings, and especially young ones, to open up to talk, listen and share emotions makes them achieve more emotional stability, evolving to become more mature. He never imagined that by listening with attention, interest, respect and empathy to teenage games, he could learn about their moods.

SURPRISE #6: THERE IS A CASE OF NATIONALISM FOR GLOBALIZATION.

Melinda Gates defines nationalism as believing that the first obligation of a country is with itself. However, it clearly states that this should not be a reason for the United States itself to stop providing foreign aid to developing countries.
Bill Gates emphasizes, however, that we all have a global responsibility. Only the Global Fund and its partners have helped save 27 million lives since 2002. The GAVI (Global Alliance for Vaccines and Immunizations) has provided vaccines to 690 million children around the world since its founding.
The above really made me, personally, confront myself intellectually about the Nationalism-Globalization dilemma. Wouldn’t it be ideal for each of us to feel like citizens of the world, of a global nation called Planet Earth, whether we live in Honduras, Bolivia, Guinea Bissau or Moscow?

SURPRISE #7: WHEN WAS THE TOILET PATENTED?

9 years ago, Bill Gates challenged the world by asking that someone invented a new toilet. The above came as a result of the numbers being extremely alarming, tragic. Today, there are 2 billion people in the planet who do not have a toilet. And sadder still, there are 800 children that die every day due to complications of various unhealthy situations.
Bill Gates is convinced that the new toilet will not be much different than the previous one, but it will be something like a treatment plant in itself that will kill pathogens and turn urine/feces into byproducts. The answer to his challenge was seen in Beijing last year. Many companies proposed toilets that met almost all logistical, technical and practical requirements; but the only element that they did not comply was the economic one. All turn out to be very expensive for poor countries. For this reason, investment in Research and Development continues aggressively.

Out of all the surprises, this is the one that interested me the most personally. Having given my first class at 18 years of age, for a long time I have been surrounded by books, whiteboards and students in class.
Bill Gates asserts that the traditional textbook will disappear. Nowadays, it is already being replaced by online text with an attractive video and even a game to reinforce the knowledge that has been learned, including a very friendly platforms to answer questions from the students. Zearn, I-Ready and LearnZillion are practical examples of digital curricula used in 3,000 schools in the United States, sponsored entirely by the Gates Foundation. In the same way, Bill Gates affirms that the disappearance of the traditional textbook will change the way in which the teachers will teach, and the students will learn.
Personally, I think the challenge will be to be able to achieve a kind of  teaching that will be more effective, less expensive and more fun, which is a dream come true for me.

SURPRISE #9: CELL PHONES ARE THE MOST POWERFUL WEAPONS AT THE HANDS OF THE POOREST WOMEN.

“In developed countries, the cell phone helps us make faster what we normally do; in poor countries: it doesn’t only do that, it also reduces marginalization due to the connectivity itself.” — Melinda Gates.


Proactive women in poor countries not only use their cell phones to access services and opportunities: they use them to change social norms and challenge the power structures that perpetuate their inequality (they do banking, buy medicines at the pharmacy, serve clients of their businesses, etc.). Melinda Gates gives as an example the story of Nikmah, an Indonesian mother who for years tried to support her family through the sale of vegetables, without success, until the GO-JEK application, a mobile platform for food delivery and services, allowed her to start her own business.

The last surprise took me by surprise. It turned out to be extremely pleasant to know that my way of seeing things is shared by other people in the world, particularly Bill and Melinda Gates. And, since I've been fascinated by quotes  for a long time, I'd like to close this essay  with some simple, straightforward, short but powerful lines that Bill and Melinda Gates share at the end of their letter:

To be an optimist in developing countries like ours , is not an option, it’s a responsibility.